Edinburgh Airport applies to CAA for flight path changes on the back of two flawed and error riddled consultations.

Edinburgh Airport Limited (EAL) has published rather vague information about its application to the CAA for changes to flight paths.

While the detail remains unclear, these proposals will amount to radical change in the skies above the Lothians, Falkirk and Fife – just like a new motorway network appearing above our heads. 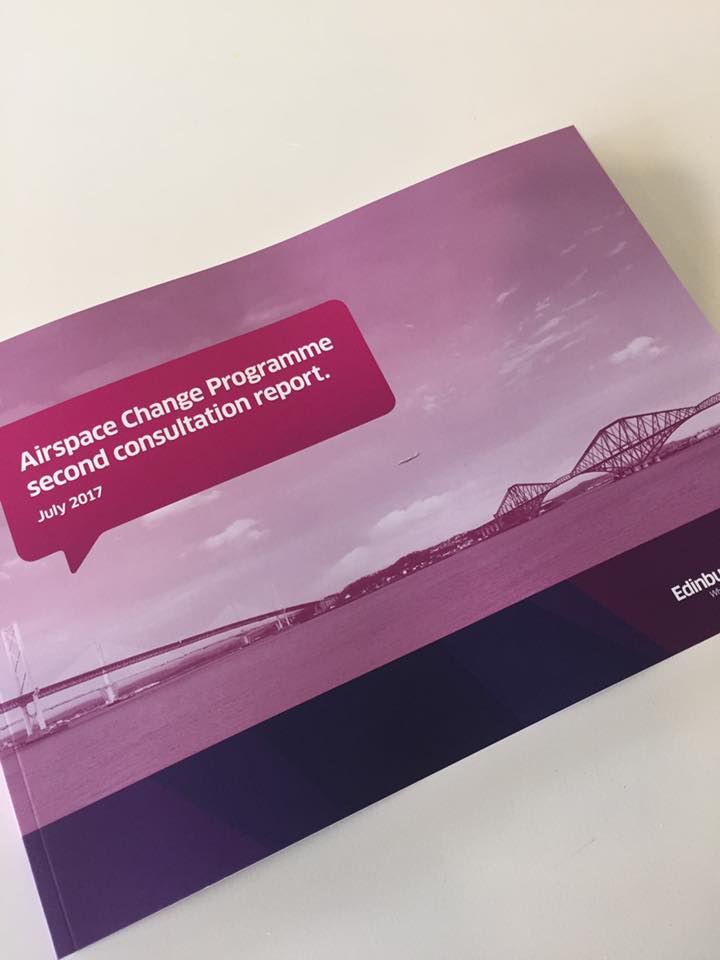 This application comes on the back of two consultations by EAL, both of which contained multiple errors. In their recent report into their second consultation, the airport admitted some of these errors and said they were “embarrassed” by them. Some errors were impossible to understand, including a complete and inexplicable failure to count heads properly. It is simply breathtaking incompetence on an epic scale, without any support from the people who will bear the brunt of the impact.  The Consultation Institute has been unable to award it’s good practice designation without qualification to the Airport.

We have serious questions about this process:

1. What is the problem that the airport is trying to solve?
There is no proper justification for the changes proposed
Every time Communities challenge the airport with evidence, they change their justification for change. First they said it was for modernisation, then growth, now it is apparently about problems they have with their peak time scheduling. We continue to dispute that they airport has set out a clear, and justifiable case for change.

EAL has admitted to serious errors they made in both consultations. Both the initial and second consultations were decried as unfair and incompetent. Any conclusions drawn from either cannot be relied on.
The airport’s own consultants refused to sign off on the second consultation due to the multiple errors the airport made, including an extraordinary failure to count overflown populations correctly.

3. EAL now says it will use some flight paths only at morning peak times of 6am to 10am, meaning an unwanted and daily early morning wake up call for anyone unfortunate to find themselves living beneath.
We ask how can this operating restriction be policed? Experience shows that the airport’s word simply cannot be trusted.
Per the World Health Organisaion definition, “Night” is from 2300 – 0700. EAL wishes to disturb residents’ sleep from 6am every day.

In any case, there is serious disagreement with communities that the airport’s self made issue with early morning peak time delays in departures can be resolved by changes to flight paths.

Instead, it is clear to us that EAL must look at more efficient ground handling and better scheduling of its departures – which are issues to be managed on the ground and are NOT related to flight paths.

A spokesman for Edinburgh Airport Watch said:
We call on the airport to halt this flawed process now. The CAA must scrutinise this application very carefully, and understand that there is no Community support for these changes.

With 52% of responders being “negative”, we do not accept that there is any evidence that these changes have any “broad support” among communities as the airport claims.

Noise complaints to Edinburgh Airport are at record levels, the daily misery being caused to people in their homes, schools and businesses by the airport and its Air Traffic Controllers, NATS, cannot be allowed to continue.

We call on our government to intervene and ask serious questions about whose interests are being served by such radical proposals for change to flight paths that will have life altering consequences for the health and well being of hundreds of thousands of people across East Central Scotland.

With most of the flights from Edinburgh airport being short hops mainly to London, why isn’t this traffic going by train, a far less polluting and divisive form of transport?

Scotland’s need for a coherent transport policy that takes full account of the health and environmental impacts of the aviation industry has never been more urgent. We call on our Government to act in the interests of the people who elect them, and not those of the anonymous offshore global conglomerates who have gobbled up our airports, and now want to rob ordinary people of our quality of life.

The Consultation material was based on several false claims:

1. Population data was wrong throughout the consultation material, rendering incredible the airport’s claim that 25,000 fewer people would be overflown. We cannot find any correlation between the population data the airport published, and the 2011 Census which they claimed was the data source.

2. Moving to RNAV technology does not of itself require new flight paths as the airport claimed – existing flight paths can be converted to use modern navigation technology such as RNAV.

3. The baseline of the current pattern of flight paths shown in the consultation actually reflected the multiple and bitterly disputed changes the airport has already made in the use of airspace since 2015 and not the established pattern of airspace use as the airport claimed.

4. The airport’s claims that it needs new flight paths to grow do not stand up to scrutiny – there are fewer take-offs and landings at the airport now than at their peak 10 years ago. Passenger numbers have grown, but only because the planes are bigger and flying more full.

5. At the initial stage consultation in 2016 many residents were told unequivocally they would not be affected, yet in 2017 at Stage 2, then found preferred routes right over them, eg Winchburgh, North and South Queensferry, Kirknewton. Residents in these areas feel that they have been unfairly disadvantaged as a result.

6. Overall, 52% of responders to the second consultation gave an emphatic thumbs down to flight path change, yet the airport is pressing ahead anyway. Why?

7. Overall, less than 1% of the population responded to the second consultation, yet the airport claims “change was broadly accepted”. Where is the evidence to support such an assertion?

8. The whole precept of change is based on two factors a) a need for capacity and b) a reduction in environmental impact. It has been repeatedly demonstrated by Communities that the capacity issue is nonsense and that current aircraft movements remain below the 2007 peak. Any foreseeable economic growth could be managed by simple scheduling changes particularly around peak times.

9. The environmental case is completely flawed; the population statistics are plain and simply wrong and the claims of reduced impacts have neither a baseline nor any methodology. For an industry that prides itself on world-leading safety standards this is a truly shocking and embarrassing shambles

10. The airport made multiple errors in the response mechanisms, their freepost address was wrong on their website so that responses were returned, incorrect questions were asked in the survey forms, they wrongly rejected many responses. The manner the survey data has been presented is highly misleading, with data presented in graphs using different scaling, making proper comparisons difficult. The practice of including any responses marked “not applicable” is simply wrong, and further renders the conclusions made unreliable.

Edinburgh Airport Watch is a Community group set up in response to the 2015 TUTUR flight trial debacle and other changes in the pattern of use of the airspace around Edinburgh Airport campaigning for positive benefits for Communities in relation to the operations of Edinburgh Airport. We are non-political and give our time for free.